No bugs no birds

When Ashtabula County Master Gardeners speak to local groups about creating bird-friendly landscapes, the volunteers are often asked why certain bird species are disappearing from backyard feeders. At times the answer is simply that some birds, like goldfinches (Carduelis carduelis), move from place to place within their territory to ensure a food source isn’t depleted. Another reason is not quite so benign. Many native bird populations are in serious decline because of the loss of habitat and subsequent food sources. Last year, Audubon scientists announced that one-third of wintering North American bird populations have declined since 1966.

Furthermore, the North American Bird Conservation Initiative (NABCI) reports that 432 of the area’s 1,154 native bird species are at risk of extinction without significant action to stop or decrease their decline. Generalists (birds that can adapt to different habitats) fare pretty well. But many species have very specific habitat and food requirements. These birds are in trouble.

The native field sparrow (Spizella pusilla) is a good example. While the European house sparrow thrives near human habitations, the field sparrow lives in shrubby bush and grasslands, avoiding urban areas. Though still common, field sparrows have declined sharply in the last half-century, partly because of the expansion of suburbs, where they will not nest.

Not so common any longer is the cerulean warbler (Setophaga cerulea), whose population is dropping faster than any other warbler species in the United States. Between 1966 and 1999, it declined an average of 4 percent per year throughout its eastern U.S. breeding range for a total population loss of 70 percent. Current estimates are at 560,000 birds.

Habitat destruction because of agriculture and development is a major threat to this tiny blue avian. Habitat fragmentation also causes egg parasitism by brown-headed cowbirds, which are more likely to lay their eggs in warbler nests on the edge of forests. Any climate change that disturbs the delicately timed balance of insect emergence the birds rely on for food may further threaten cerulean warblers.

The haunting flute-like song of wood thrushes (Hylocichla mustelina) is also disappearing from the woods in northeastern Ohio and Pennsylvania. For the past 50 years, their numbers have decreased more than 60 percent. Originally, forest loss in Central America was thought to be the primary cause of wood thrush decline, but scientists from the Smithsonian Migratory Bird Center (SMBC) have found that the steepest regional declines have likely been the result of loss of habitat on breeding grounds in North America.

“The wood thrush is an umbrella species for other migratory birds and non-migratory species that depend on eastern deciduous forest,” Smithsonian’s Clark Rushing has said. “There’s a whole suite of species that have similar habitat requirements, so protecting wood thrush in these places will be beneficial for these other species too.”

What can we do locally to stop or slow down the decimation of native bird populations? Unless we own thousands of acres of land, reestablishing deciduous forests can be a bit difficult. But there is one practice we can easily undertake as homeowners and gardeners to help preserve and protect many native bird species.

We can plant natives. Planting native grasses, perennials, shrubs and trees offer protection and food sources for all of our North American birds. Indigenous insects that won’t nibble on exotic plants thrive on native species. That may seem like a good thing to gardeners, but almost all birds need bugs as a food source during the breeding season, and for many species, insects are their primary diet No bugs, no birds! 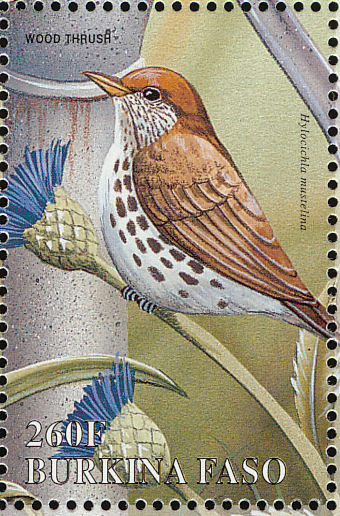