The list of threatened birds, a testimony to human culpability, exploitation and neglect, is increasing every year. Just to take India’s case there were seven critically endangered species in 2000. Their numbers went up to nine in 2001; they increased to 12 in 2008; 14 in 2010 and 15 in 2011, when the Great Indian Bustard Ardeotis nigriceps was added to the list. According to IUCN, critically endangered species are those facing extremely high risk of extinction in the wild in the immediate future, and if nothing is done, the species might become extinct in 10 years, or in less than three generations (see http://iucn.org/themes/ssc/siteindex.htm for more details). Marginally less threatened, according to the IUCN criterion, are endangered species. There are 16 endangered bird species in India, including Lesser Florican Sypheotides indicus, Egyptian Vulture Neophron percnopterus, Narcondam Hornbill Rhyticeros narcondami and Masked Finfoot Heliopais personata. Then there are vulnerable species: these face high risk of extinction in the wild in the medium term. Fifty-eight Indian birds fall in this category. The species that are at a lower risk are termed near threatened. These are species I consider “sick”. They are not likely to die soon, but need our care and support to survive. There are 68 such species in India based on existing information but a comprehensive assessment of Indian birds is quite likely to make the list longer.

The species that are doing well are classified as “least concern” by IUCN . However, the dramatic decline of vulture species in the past 20 years and the slow decline of house sparrow indicate no species is safe enough in this human-dominated world. For example, in the 1990s, Gyps vultures of Asia were deemed as doing well according to IUCN but by 2001 the status of the bird had plunged to that of critically endangered species. We do not know which other species faces such unfortunate fate.

150 bird species need help. According to the BirdLife and IUCN list of 2011, more than 150 bird species with homes in India fall in globally threatened categories. Some of these like the Dalmatian Pelican Pelecanus crispus, Marbled Teal Marmaronetta angustirostris, Japanese Quail Coturnix japonica, Grey-sided Thrush Turdus feae are migratory species; they make India their home in winters. A few like the Socotra Cormorant Phalacrocorax nigrogularis, Lesser White-fronted Goose Anser erythropus and the Buff-breasted Sandpiper Tryngites subruficollis are occasional visitors. There are also some birds like Little Bustard Tetrax tetrax, Hooded Crane Grus monacha and Red-breasted Goose Branta ruficollis which used to visit India but have not been seen in the country in the past 100 years. Since these birds make India their home for a part of the year, they figure in the threatened birds list of the country. We, however, cannot do much for their conservation as threats to them lie outside the country’s borders. But even if we exclude these visitors, there are more than 130 Indian bird species that need immediate attention. The country certainly has a major responsibility towards birds unique to it and threatened like the Narcondam Hornbill, Grey-headed Bulbul Pycnonotus priocephalus, Nilgiri Blue Robin Myiomela major, White-bellied Blue Robin Myiomela albiventris and Nicobar Bulbul Hypsipetes virescens. Then there are birds like the Great Indian Bustard Ardeotis nigriceps, Lesser Florican Sypheotides indicus, Rufous-rumped Grassbird Graminicola bengalensis and the Spot-billed Pelican Pelecanus philippensis whose global population will be in jeopardy if they disappear from India. The question is: are we doing anything to see that such birds survive in the increasingly human-dominated and materialistic country?

Apart from listing many bird species in Schedule I of the Indian Wildlife (Protection) Act, 1972, and all other bird species in Schedule IV (a list of protected species), and banning bird trade in 1992, not much has been done in India to protect the avian wealth. Many threatened species like the Austen’s Brown Hornbill Anorrhinus austeni in Namdapha in Arunachal Pradesh and Black-breasted Parrotbill Paradoxornis flavirostris in Kaziranga get incidental protection as they live in protected areas, while some like the Grey Pelican Pelecanus philippensis and Painted Storks Mycteria leucocephala in Kokkre-Bellur in Karnataka and Telineesapuram in Andhra Pradesh are protected by communities. But overall there is no government scheme to protect Indian birds. Harmful pesticides, many of them prohibited in other countries, are still being used and, in fact, being strangely promoted by the government of India, though it is proved they are harmful to insectivorous birds.

The result is that once common Indian Roller Coracias benghalensis or neelkanth and the Black Drongo Dicrurus macrocercus are now uncommon. Raptors, or birds of prey, which are at the apex of the food chain in the avian world are the worst victims of pesticide poisoning. During surveys and field work in the Thar Desert over the past 30 years, I have noticed massive decline of raptors. The sky is now almost empty of these birds. Similarly, nightjars which totally depend on nocturnal flying insects for food, are disappearing (although no data are available) even in protected forests. Next time you go to Dudhwa or Corbett National Park, you might have to strain yourself to hear the characteristic resonant chunk, chunk, chunk call of the large-tailed nightjar or the whiplash-like noise sweesh, sweesh of the Savanna Nightjar Caprimulgus affinis.

Do note that the Indian Roller, Black Drongo, Large-Tailed Nightjar Caprimulgus macrurus and Savanna Nightjar are birds that require least concern according to IUCN. I have cited their example just to show that even “common” species are not so common anymore.
The Great Indian Bustard, once found in Punjab and Haryana in the north to Bihar and Odisha in the east and to Tamil Nadu in the south is now critically endangered with perhaps less than 300 of them left in the world. In the 1980s, after a successful international conference on bustards at Jaipur, eight bustard sanctuaries were announced. But due to mismanagement and neglect, the bird has disappeared from four such “bustard” sanctuaries and is dying in the other four. The Greater Adjutant Leptoptilos dubius, a large ugly bird once extremely common in north and northeast India (and some south-east Asian countries), is now fighting a losing battle of survival. Perhaps less than a thousand are left in India, mainly in Assam. About 50 per cent of the bird’s population can be seen on the garbage dump outside Guwahati where it feeds on human waste. The proud owner of the jheels and marshlands where it fed on fish, frog and snakes, now forages for scraps left by humans because we have overtaken its home and resources by overfishing, poisoning and drainage of wetlands.

Ten years ago, a very active local conservation organisation, Green Guards, set up a rescue centre in Nagaon district. Here fallen and injured chicks of Greater Adjutant were rescued, raised, and later released when they were capable of looking after themselves. When the funds given by US Fish and Wildlife Service ran out, the rescue centre had to be closed. Since then attempts to raise funds within India have failed. No one has funds for a species on the verge of extinction. For mandarins in the Planning Commission, what difference will it make if one more species becomes extinct?

Among the 68 near threatened Indian bird species, I will cite the example of Nicobar Parakeet Psittacula caniceps to highlight the problem of birds in small islands.

The bird is unique to the Nicobar archipelago, where it is found in the Great Nicobar, Little Nicobar, Menchal and Kondul islands. It is found nowhere else in the world. This inhabitant of the rainforests, locally called chauraulo, was earlier hunted by traditional methods which did not make much difference to its numbers. But now air guns have tilted the balance: the parakeet has no defence against the gun pellets, and nowhere else to go. Their number is going down but since the forest is largely intact, the bird is still around. But for how long? Any further exploitation of forest and increase in hunting pressure will bring the species to the vulnerable category. Many other species in the Andaman and Nicobar islands face similar threats.

To protect Indian birdlife and all other taxa, we have to move away from a tiger-centric conservation paradigm. The government should treat all threatened species equally and make sure that species-targeted and habitat-targeted conservation actions are in place. The government is organising the next Conference of the Parties of the Convention of Biological Diversity in October 2012.

Can we prove we are taking sufficient measures to see that no Indian bird species goes extinct in the near future. 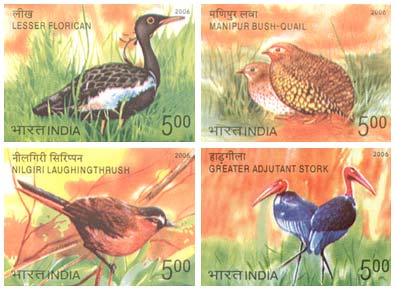