There is a very important shift in our understanding of the risk of neonicotinoid insecticides. Their risk may increase exponentially over time, rendering even very small amounts of neonicotinoids much more toxic than previously realized. Dutch researcher Dr. Henk Tennekes, with Dr. Francisco Sanchez-Bayo of Australia, have recently published a review article in the Journal of Environmental & Analytical Toxicology: "Time-Dependent Toxicity of Neonicotinoids and Other Toxicants: Implications for a New Approach to Risk Assessment" (attached). Their starting point is the Druckrey–Küpfmüller equation dt^n = constant (where d = daily dose and t = exposure time-to-effect, with n>1) for chemical carcinogens. The Druckrey–Küpfmüller equation established in the early 1960s explains why toxicity may occur after prolonged exposure to very low toxicant levels. In essence, this equation states that the total dose required to produce the same effect decreases with decreasing exposure levels, even though the exposure times required to produce the same effect increase with decreasing exposure levels. Druckrey and Küpfmüller inferred in the late 1940s that if both receptor binding and the effect are irreversible, exposure time would reinforce the effect. Recently, similar dose–response characteristics have been established for the toxicity of the neonicotinoid insecticides imidacloprid and thiacloprid to arthropods. The nicotinoids act on the central nervous system of insects, causing irreversible blockage of postsynaptic nicotinergic acetylcholine receptors (see the review of insecticides by Professor George W. Ware of the University of Arizona, attached). Imidacloprid mimics the action of acetylcholine, but unlike acetylcholine, imidacloprid is not deactivated by acetylcholinesterase and thus persistently activates nAChRs. Chronic exposure of insects to imidacloprid therefore leads to cumulative and irreversible blockage of nAChRs in their central nervous system, which play roles in many cognitive processes.
An example of the consequences for insects in the case of imidacloprid is given in Table 5 (attached). Since imidacloprid and other neonicotinoid insecticides have time-dependent effects on arthropods, the risk of foraging worker bees feeding on tiny levels of residues becomes an issue that cannot and should not be ignored. In the example shown here, 50% of worker bees would die within 7-12 days if feeding on a field where 11% of plants have residues of imidacloprid in the specified range (Table 5). By contrast, standard hazard quotients (HQ) for dietary NOEL of 20 microgram per Litre are misleading because they suggest that imidacloprid poses no danger to honey bees. Given that honey bee workers can live up to a few months in winter time the NEC (No Effect Concentration) for imidacloprid is estimated as close to zero, which means that any residue concentration found in pollen will have a lethal effect provided there is sufficient time of exposure.

Dr. Tennekes summarizes his deep concerns: "The article reviews a paradigm shift in the science of toxicology. The dose : response characteristics of neonicotinoid insecticides turn out to be identical to those of genotoxic carcinogens, which are the most dangerous substances we know. Such poisons can have detrimental effects at any concentration level. Current pesticide risk assessment procedures are flawed and have failed to protect the environment. Traditional approaches that consider toxic effects at fixed exposure times are unable to allow extrapolation from measured endpoints to effects that may occur at other times of exposure. Time-to-effect approaches that provide information on the doses and exposure times needed to produce toxic effects on tested organisms are required for prediction of toxic effects for any combination of concentration and time in the environment."

Sources:
Tennekes, H.A. (2010) The significance of the Druckrey–Küpfmüller equation for risk assessment—The toxicity of neonicotinoid insecticides to arthropods is reinforced by exposure time. Toxicology 276, 1-4 (attached).
H. A. Tennekes and F. Sánchez-Bayo (2011) Time-Dependent Toxicity of Neonicotinoids and Other Toxicants: Implications for a New Approach to Risk Assessment. J Environment Analytic Toxicol S4:001. doi:10.4172/2161-0525.S4-001 (attached)

The inference made by Henk Tennekes and Francisco Sanchez-Bayo that very small amounts of neonicotinoids are much more toxic in the long run than previously realized has been convincingly demonstrated in recent years for honey bees. This story starts in 2001. Luc Belzunces, a bee researcher at INRA (the French agricultural research institute) in Avignon published “Discrepancy between acute and chronic toxicity induced by imidacloprid and its metabolites in Apis mellifera” (Environ Toxicol Chem. 20(11):2482-6, article attached). He found an acute lethal dose of imidacloprid of only 40 nanogram per bee, much less than most other insecticides. However, his big discovery was that the lethal dose from chronic exposure to imidacloprid was 4,000 times less, “Ingesting 1 picogram a day was enough to kill a bee within 10 days”, he told INRA magazine (June 2009). “Moreover, imidacloprid degrades into 6 metabolites, some of which are even more toxic.” He said that the capacity to measure very small traces of imidacloprid in pollen now shows that the concentration is in the range of microgrammes per kg (parts per billion) of pollen and that this constitutes a risk for bees.
Sources:
Lab Times 6-2010, 30-35 (attached)
Marie-Pierre Chauzat, Jean-Paul Faucon, Anne-Claire Martel, Julie Lachaize, Nicolas Cougoule, and Michel Aubert (2006) A Survey of Pesticide Residues in Pollen Loads Collected by Honey Bees in France. Journal of Economic Entomology 99(2): 253-262 (attached)
Luc Belzunces' conclusion was subsequently substantiated by Dr Jeff Pettis of the US Agricultural Research Service and his colleagues. Since one thing common to bee colonies that go on to collapse seems to be a greater variety and higher load of parasites and pathogens than other colonies, they wondered in particular whether neonicotinoids might be weakening the insects’ immune systems, and thus allowing infections to spread through a hive. To find out, they gave 20 hives protein food (a substitute for pollen, which is fed to developing larvae) that had been spiked with imidacloprid. In ten cases the dose was five parts per billion (ppb); in the other ten it was 20 ppb. Previous experiments have shown that neither dose perceptibly harms bees. A further ten hives were given unspiked food as a control. Then, when the young bees emerged a few weeks later, Dr Pettis collected them and fed them with spores of a fungal parasite called Nosema. Twelve days later, he killed them and estimated the extent of their infestation. Both of the groups that had been exposed to imidacloprid harboured an average of 700,000 parasite spores in each bee. Bees from the control colonies, by contrast, harboured fewer than 200,000 spores in their bodies. The insecticide, in other words, was exposing bees to infestation, and thus to a much greater chance of dying prematurely. Similar results had been published by Cédric Alaux and his colleagues from France in 2010.
Sources:
Cédric Alaux, Jean-Luc Brunet, Claudia Dussaubat, Fanny Mondet, Sylvie Tchamitchan, Marianne Cousin, Julien Brillard, Aurelie Baldy, Luc P Belzunces, and Yves Le Conte. Environ Microbiol. 2010 March; 12(3): 774–782 (attached)
http://www.ncbi.nlm.nih.gov/pmc/articles/PMC2847190/
Jeffery S. Pettis & Dennis vanEngelsdorp & Josephine Johnson & Galen Dively (2012)
Pesticide exposure in honey bees results in increased levels of the gut pathogen Nosema
Naturwissenschaften DOI 10.1007/s00114-011-0881-1 (attached).
The Economist, 28 January 2012
http://www.economist.com/node/21543469
Effects of sub-lethal levels of imidacloprid on cognitive processes in honey bees, almost certainly a result of virtually irreversible blockage of postsynaptic nicotinic acetylcholine receptors (nAChRs) in the central nervous system, have also been observed. E.C. Yang and his colleagues demonstrated in 2008 that sub-lethal doses of imidacloprid can alter honey bee foraging and learning. Foraging honey bees reduced their visits to a syrup feeder when it was contaminated with very low levels of imidacloprid.
Sources:
Abbink, J. (1991). The biochemistry of imidacloprid. Pflanzenschutz-Nachrichten Bayer (Germany, F.R.) Serial ID – ISSN: 0340-1723
E. C. Yang, Y. C. Chuang, Y. L. Chen, and L. H. Chang (2008) Journal of Economic Entomology 101(6):1743-1748 (attached).

These adverse effects of minute levels of imidacloprid are detrimental to the bee colony in the long run and may ultimately cause colony collapse. But bee decline is not the only problem. Neonicotinoid insecticides are prone to leach from soils. Not only are they water soluble and mobile in soil, they are also quite persistent in soil and water. The widely used neonicotinoid insecticide imidacloprid has caused major pollution of Dutch surface water. In his book "The Systemic Insecticides: A Disaster in the Making" (published in November 2010) Dutch toxicologist Dr Henk Tennekes relates significant recent declines of bird and bee numbers across Europe to the use of neonicotinoid pesticides in agriculture, and suggests that their continued use could result in an ‘environmental catastrophe’. Attached is a map of Holland showing the agricultural areas where the use of imidacloprid is permitted.
Source: The Ecologist, 16 November 2010
http://www.theecologist.org/News/news_round_up/684945/controversial_pest...
Lecture by Henk Tennekes on 16 February 2011 at the Institute of Public Health of Heidelberg University on the risk profile of neonicotinoid insecticides and their impact on non-target insects and birds (powerpoint presentation attached). Klaus Maresch recorded the English version of this presentation and placed it on Youtube: http://www.youtube.com/watch?v=M4RIDWuCN-A
Interview with Henk Tennekes (April 2011):
http://www.youtube.com/watch?v=2ZzgeYJXyMw
Letter to the Editor of Toxicology by Bayer scientists Drs. Maus and Nauen (attached):
http://nl.sitestat.com/elsevier/elsevier-com/s?sciencedirect&ns_type=cl…
Reply Letter to the Editor of Toxicology by Dr. Tennekes (attached):
http://nl.sitestat.com/elsevier/elsevier-com/s?sciencedirect&ns_type=cl…

What would be required is information on the exposure concentrations and exposure times needed to kill bees. Mortality should be determined under continuous exposure conditions to a range of concentrations at defined time intervals (say after 1, 2, 3, 7 and 14 days of exposure), specially in the case of oral exposure. In that way, not only LC50 values can be established for each of these time points but also the t50s can be estimated by regression analysis. Once this information is obtained, the risk assessment should consider the pesticides residues found in pollen, and the frequency of such residues in the environment, in order to estimate the time to 50% mortality (i.e. t50). An example for the case of imidacloprid is given in Table 5 (attached). Since imidacloprid and other neonicotinoid insecticides have time-dependent effects on arthropods, the risk of foraging worker bees feeding on tiny levels of residues becomes an issue that cannot and should not be ignored. In the example shown here, 50% of worker bees would die within 7-12 days if feeding on a field where 11% of plants have residues of imidacloprid in the specified range (Table 5). By contrast, standard hazard quotients (HQ) for dietary NOEL of 20 microgram per Litre are misleading because they suggest that imidacloprid poses no danger to honey bees. Given that honey bee workers can live up to a few months in winter time the NEC for imidacloprid is estimated as close to zero, which means that any residue concentration found in pollen will have a lethal effect provided there is sufficient time of exposure 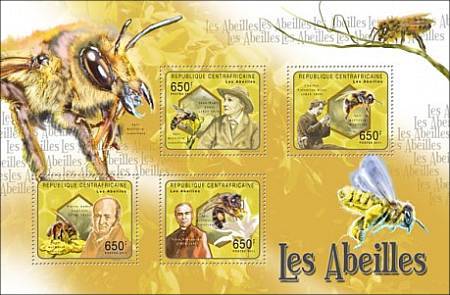