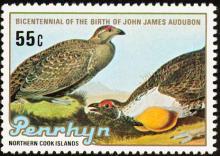 New data on the Wyoming sage grouse (Centrocercus urophasianus) population reveals bird numbers will likely decline in the coming year based on an analysis of sage grouse wings provided by hunters. In 2016, there were 0.9 chicks per hen, down from 1.7-1.8 documented in 2014 and 2015. This ratio is near the low of 0.8 chicks per hen noted in 2012. The 10-year average, from 2006-2015, was 1.2 chicks per hen. Grouse numbers declined in most of those years. Researchers following radio-marked sage grouse across the state also reported low nest success and chick survival in 2016. 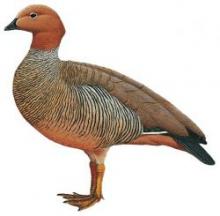 In the early 20th century, tens of thousands of Ruddy-headed Geese crowded the deserts of Patagonia. Today, they have become a rare sight. However, they still inhabit the Falkland Islands (Malvinas) in large numbers and some argue that these island-dwellers could be the key to one day repopulating the continental. However, in a blow for the future of this species, a new study reveals reintroduction might not be possible. 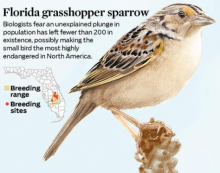 The prairie chicken (Tympanuchus cupido) once numbered about 3 million across an area that stretches through eastern New Mexico, eastern Colorado, western Kansas, western Nebraska, northwest Oklahoma, and in parts of the Texas Panhandle and South Plains. Estimates show their population now at 30,000 to 40,000. In some places that used to be native range, estimates show a 97 percent decline. In many other former ranges, these birds are gone, probably never to return. Today, these birds currently occur in parts of only 10 states.

With a crown of stiff gold-coloured feathers on its head, a bright red gular sac and body made of gray, brown, gold and white patches, the grey crowned crane stands out for its striking features. Commonly called the crested crane (Balearica regulorum), it is a bird of national significance to Uganda, occupying a prime position on the country's national flag and coat of arms. Yet despite its serenity, beauty and popularity, the crested crane is facing the threat of extinction. 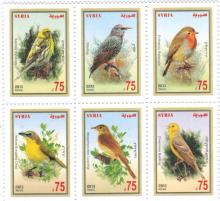 A new analysis of the population status and trends of all landbirds in the continental U.S. and Canada documents widespread declines among 448 bird species — a troubling indicator of the health of these species and their ecosystems. According to the new Partners in Flight Landbird Conservation Plan, released August 15, nearly 20 percent of U.S. and Canadian landbird species are on a path toward endangerment and extinction in the absence of conservation action. Partners in Flight is a network of more than 150 partnering organizations throughout the Western Hemisphere.

Scientists have discovered a new species of colorful songbird in the Galápagos Islands, with one catch: it's extinct. Researchers from the California Academy of Sciences, San Francisco State University (SFSU), the University of New Mexico (UNM), and the San Francisco Bay Bird Observatory (SFBBO) used molecular data from samples of museum specimens to determine that two subspecies of Vermilion Flycatchers, both found only in the Galápagos, should be elevated from subspecies to full species status.

The widespread use of neonicotinoid insecticides in recent years has led to increasing environmental concern, including impacts to avian populations. In Texas and across their range, Northern Bobwhite (Colinus virginianus; hereafter bobwhite) habitat frequently overlaps with agricultural areas of known neonicotinoid use.

Erik Runquist saw it for a moment, then it was gone. Walking a tract of Nature Conservancy-owned prairie outside Moorhead, Runquist caught a glimpse of a Dakota skipper (Hesperia dacotae), a thumbnail-sized, orange and brown butterfly. It perched atop a coneflower before disappearing into the prairie grass. "Skippers are evasive. You may get only a few seconds to be able to find it before it zips off the coneflower, especially if it's a windy day," said Runquist, the Minnesota Zoo's butterfly conservation biologist.

A few years ago on a Sunday drive near the edge of West Fargo, creeping along with no particular route in mind, one of my kids let out the proverbial, "look." Instinctively, I took my foot of the gas—not that slowing from 10 mph down to 5 mph would make much of a difference—but it was slow enough to allow enough of a look to positively identify the bird as Western meadowlark (Sturnella neglecta). Years ago, a meadowlark, even near the edge of town, might not have prompted a stop.