The tally of the world’s endangered birds is growing ever larger, with some populations shrinking at startling rates. “The State of the World’s Birds 2018” report, which was released last month by BirdLife International (the world’s leading authority on avian conservation), notes that 13 per cent of the planet’s 11,000 or so bird species – roughly one in eight – are threatened with extinction.

In Hong Kong, the endangered proportion of the total is slightly lower, at about 10 per cent of 522 species. This is no reason to feel upbeat, however: Hong Kong was deforested long ago, wiping out “forest specialists” (birds that primarily breed in wooded environments) and largely leaving room only for species adapted to living in areas shaped by humans.

Indeed, according to the report, human activity is respon­sible for losses worldwide. The main culprit has been farming, which has affected the populations of 74 per cent of globally threatened bird species. Logging and defor­esta­tion have caused declines in 50 per cent of the most endangered species, with invasive species (39 per cent), hunting/trapping (35 per cent), climate change (33 per cent) and residential/commercial development (28 per cent) also having a ruinous impact.

The report notes, in fact, that people – through the destruction of wildlife habitats and exploitation of natural resources – are now driving the sixth mass extinction event since animals first appeared, more than 500 million years ago. Such behaviour has, in the past, mainly affected bird species that had small populations living in specific environ­ments, but familiar and previously widespread birds are now also under serious threat.

One is the yellow-breasted bunting (Emberiza aureola), a songbird that was once so abundant in China it was known as the “rice bird”. I first saw yellow-breasted buntings in the mid-1980s, at Beidaihe, in Hebei province. The coastal resort in northeast China has long been a bird migration hot spot, and an orni­tho­logist wrote in the early years of the last century that every September these buntings would “swarm in the crops” before they headed to Southeast Asia to see out winter.

While num­bers were undoubtedly lower by the 80s, the birds were still common and, to me, always a welcome sight – especially the breeding-plumage males, which are like sparrows but bright yellow below, with black hoods, brown chest collars and white wing patches. In Hong Kong, too, yellow-breasted buntings were abundant in the autumn, with a peak count of about 3,000 spotted near Yuen Long in 1950, according to the book The Avifauna of Hong Kong, published in 2001 by the Hong Kong Bird Watching Society (HKBWS).

“Yellow-breasted buntings were practically everywhere at the right time of the year,” says Lam Chiu-ying, honorary president of the HKBWS, and former director of the Hong Kong Observatory (2003-09), who began birdwatching in 1976. “To me, it was a common bird.”

But numbers here and elsewhere began falling and, by 2004, the species was added to the endangered list by the International Union for Conservation of Nature (IUCN), in the category “Near Threatened”. Four years later, BirdLife International assessors for the IUCN’s Red List of Threatened Species ranked the yellow-breasted bunting as “vulnerable” to extinction.

In 2013, its status was altered to “endangered”, and last year the bird was rated as “critically endangered”, joining 221 other species globally (several are so rare that they have not been seen for decades). The rating was supported by a study published in 2015, in scientific journal Conservation Biology, that stated the global population of yellow-breasted buntings had collapsed by up to 95 per cent between 1980 and 2013.

Nowadays, perhaps a few dozen of these birds take sanctuary in Hong Kong each year, resting and feeding in places such as the Long Valley wetland, in the northern New Territories. The number is too low to ease fears that the bunting might go the way of the passenger pigeon – a North American bird, once abundant, that was hunted to extinction in the late 19th and early 20th centuries.

The global population of the spoon-billed sandpiper – another bird that historically passed through Hong Kong – has also plummeted in recent years. The sparrow-sized creature is the world’s only shorebird with a flattened tip to its bill. When away from its tundra breeding grounds in northeast Asia during migration and winter, it frequents tidal flats. It is also something of a “Goldilocks bird”, preferring areas that are not too muddy or too sandy, but with silt that’s just right for bulldozing through to expose shrimp and other morsels.

Unfortunately, such tidal flats are often reclaimed to create land for farming and building, and the BirdLife International report notes that two-thirds of the intertidal habitat in the Yellow Sea, between China and Korea, has been reclaimed since the 50s, including key sandpiper migration sites. Consequently, the species’ numbers have tumbled from about 1,000 pairs at the turn of the century to 100 or so pairs today, according to the IUCN’s Red List.

The great knot (Calidris tenuirostris), a chunky type of sandpiper that breeds in the far northeast of Asia and mainly spends winter in Australia) is commonly seen in Hong Kong, but less so than in previous decades. In 2007, the species numbered close to 300,000 worldwide, according to conservation non-profit Wetlands International, and yet it has become endangered after a rapid 80 per cent decline in population. Together with the spoon-billed sandpiper, it is among 15 Hong Kong shore­birds now threatened with extinction, making Deep Bay and the adjoining Mai Po Marshes wetland a crucial migra­tory stop-off between Australia and Siberia.

Hong Kong’s largest birds – like the bulky Dalmatian pelican (Pelecanus crispus), which can have a wingspan of three metres, and the oriental stork, which stands up to 1.5 metres tall – are also threatened. So is the significantly smaller, insect-eating Styan’s grasshopper warbler (Locustella pleskei) (typical adult length: about 15cm), which breeds on islands in northeast Asia, and can be spotted at Mai Po in winter.

The Baer’s pochard (Aythya baeri), a type of diving duck, was not on the IUCN’s Red List when I first arrived in Hong Kong, in 1987. Now it is rated “critically endangered”. The decline of these birds reflects the loss of lakes and swamps, along with intensive hunting. 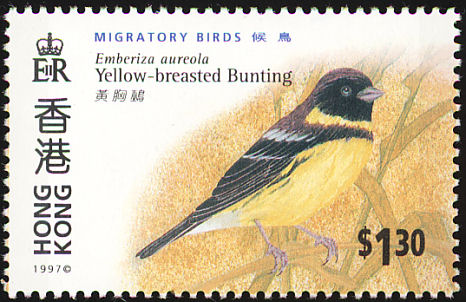